is a documentary film about
FOOD APARTHEID IN AMERICA

CHEF, GROCER, FARMER, MOTHER, ACTIVIST, EDUCATOR AND EVERYDAY VISIONARY — DETERMINED TO RESTORE HEALTH AND DIGNITY TO THE PEOPLE OF HER COMMUNITY.

Twenty-six years ago Germaine was dreaming of a career in the culinary arts, but the arrival of her firstborn put her plans of jetting off to Le Cordon Bleu in Paris on hold. She never back-burnered her dreams, graduating with honors from Johnson & Wales University.

Her love of quality food and her desire to eliminate food insecurity in her community led Germaine to establish Fresh Future Farm Inc., an urban farm in North Charleston, SC, to further her mission.

Fresh Future Farm and its associated market have distributed over 18 tons of basic and specialty groceries, hosted more than 200 students, and trained more than 100 adults in natural gardening practices. A vital part of its community, it provides fresh food, good jobs, and mutual aid to marginalized BIPOC and LBGTQ people.

As we follow Germaine’s trajectory, we learn how the fight for food justice is the fight to improve health and well-being in the Black community. But in doing so, we discover the challenges she encounters in combatting the systemic injustice of food apartheid.

The Food Justice Movement is a grassroots initiative emerging from communities in response to food insecurity and economic pressures that prevent access to healthy, nutritious, and culturally appropriate foods.

An urban area with limited or zero access to affordable and nutritious food.

The human-created system of segregation that leads to food deserts by preventing certain groups from this access.

ROOTED follows the story of Germaine Jenkins, a rising star activist and urban farmer in Charleston, South Carolina — the hub of this country’s former slave trade. Germaine’s 5-year quest to gain ownership of the .8 acre parcel of land she calls Fresh Future Farm represents more than her struggle to grow healthy food to combat the toxic diet in her food desert community; as a present-day kind of sharecropper, it mirrors the historic struggle of the Black community in a dominant White system.

We track Germaine’s battle against massive obstacles — physical, racial, legal, political, and systemic — as she petitions Charleston’s local government to either extend her farm’s lease or give her ownership of the plot. It’s a legal predicament that threatens to undo the entirety of her incredible work to-date and could effectively kill Fresh Future Farm.

The reality is that Germaine, like her ancestors, works a land she does not own. ROOTED’s deeper revelation is that when we talk about who controls the food chain and access to fresh produce in America, what we’re really talking about is whose health is prioritized, which bodies are revered,and which bodies are devalued.

We follow this activist of singular magnetism as she begins to garner attention on the national stage. Germaine’s budding celebrity is, of course, exactly the visibility urban food justice needs. But at what cost? Increasingly — as Germaine’s work is celebrated — she discovers she must walk a tightrope of salesmanship and caution in order to push her vision forward.

What is she willing to concede?
What must she sacrifice to win gains for the movement?
Is a black woman leader ever really allowed to speak truth to power?

When I started ROOTED, my intention was to make a short film that might “go viral” and win Germaine some attention for her visionary work. With my background in food systems films, I knew she was doing something groundbreaking and I wanted the world to know about it. The more we filmed, the more I realized her fight for Fresh Future Farm was steeped in systemic racism dating back to slavery, compounded by the politics of being a Black woman in today’s America. I knew our systems were broken but Germaine framed the issues in ways that exposed my blindspots and forever changed the way I see food justice. It is our hope that ROOTED will take others on this same journey and become a powerful weapon in the fight to rid American institutions of racism.

Years into the project, we find ourselves in this pivotal moment, reflecting deeply on privilege and who should be telling which stories. Filmmaking is a deeply collaborative process, and to that end I will redouble my efforts to bring more Black storytellers into the process. So during this time, while I continue to examine my role as the director of the film, Germaine and I have decided to press on together—with open-hearted and humble curiosity—to create a lasting, positive impact on the story of food justice.

It took a whole pandemic for dominant culture to finally listen to the wisdom that Black women have possessed since Creation. The American dream only works for white people to the detriment of Black and brown bodies.

Pursuing food justice in a racist place is both rejuvenating and demoralizing. The ROOTED film gave me the opportunity to speak my truth freely and without retribution to all who would listen. Bridget Besaw saw me and made me comfortable enough to verbalize the rage that wells up every day we are pushed and prodded, and the joy that comes from creating an oasis. It didn’t take long for her to understand how backward and intentionally unfair the food system is to the resilient folx who are underpaid to do the work.

In this season of renewal and understanding, Bridget continues to recruit Black talent to enrich the project and center a BIPOC point of view behind the camera. This new direction is bittersweet because her cinematography and storytelling skills jump off the screen in a powerful way. It’s a thing of beauty to watch the Bridget-Par duo take hundreds of hours of footage and craft a story that’s cohesive and real af. However, as a Black woman, I am here for what’s next. This. Is. History. In food justice and filmmaking!

While the homegrown, community-based efforts of determined revolutionaries like Germaine are chipping away locally at fresh food scarcity, the truth is that food deserts are a national affliction. The decades-deep grim reality of food accessibility in the forgotten corners of our cities has left entire communities — mostly communities of color, entrenched in poverty or buckled by persistent low wages, buying their groceries at stores that don’t even sell oranges. Those leafy greens and blueberries whose anticancer benefits are touted so often these days? They’re a fantasy, prohibitively expensive for a family managing on a limited income, and impossible to find when gas station and dollar stores are the only in-reach options. Overwhelmingly, food deserts offer only high-calorie, chemical-rich, salt/sugar laden foods. These are toxic ingredients, and the building blocks of poor health. The consequences are dire and irrefutable. Across the country, food desert communities suffer from heart disease, diabetes, and obesity — all nutrition-related health problems. 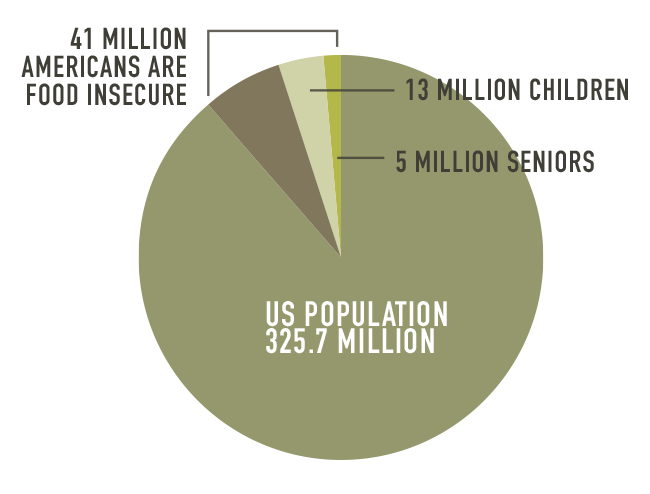 Because fresh food scarcity affects the poor and people of color at such disproportionate rates, the poor health outcomes that result are felt with crippling force in our food desert neighborhoods. A look at the hard data reveals that lack of access to fresh produce in our most vulnerable communities is not just an unfortunate urban reality — it’s a killer. 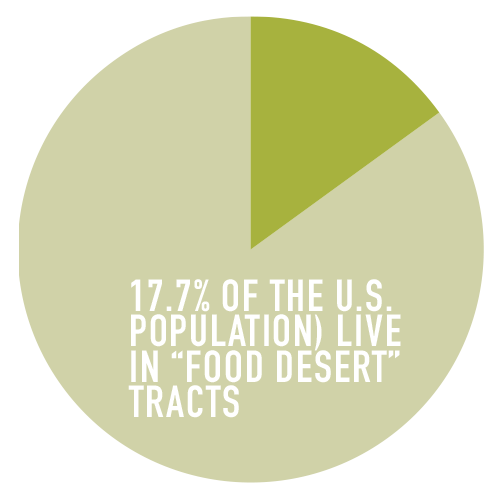 THIS IS WHY FOOD APARTHEID IS THE NEXT CIVIL RIGHTS FRONTIER. 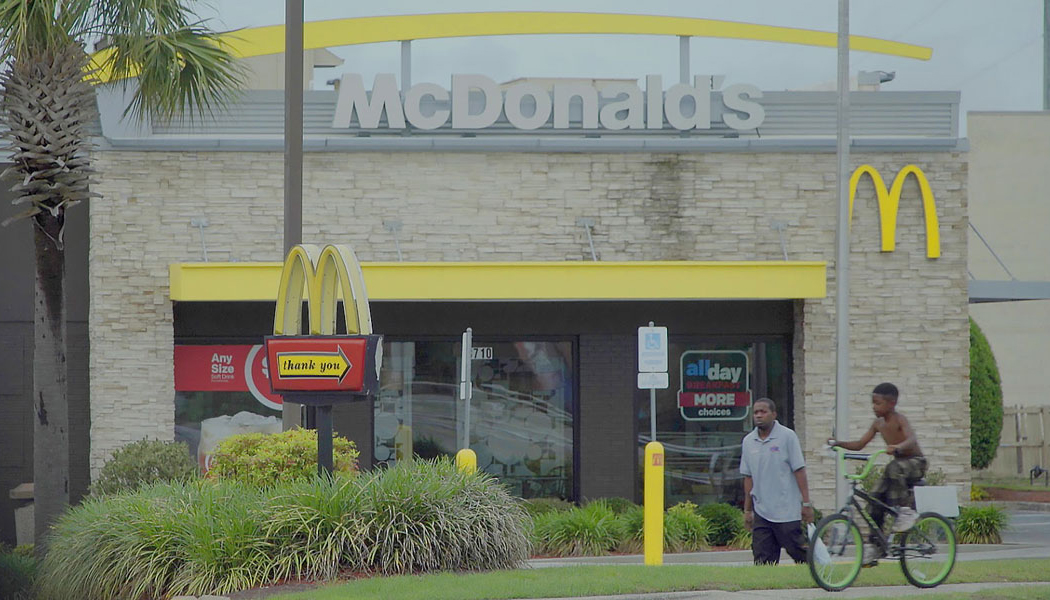 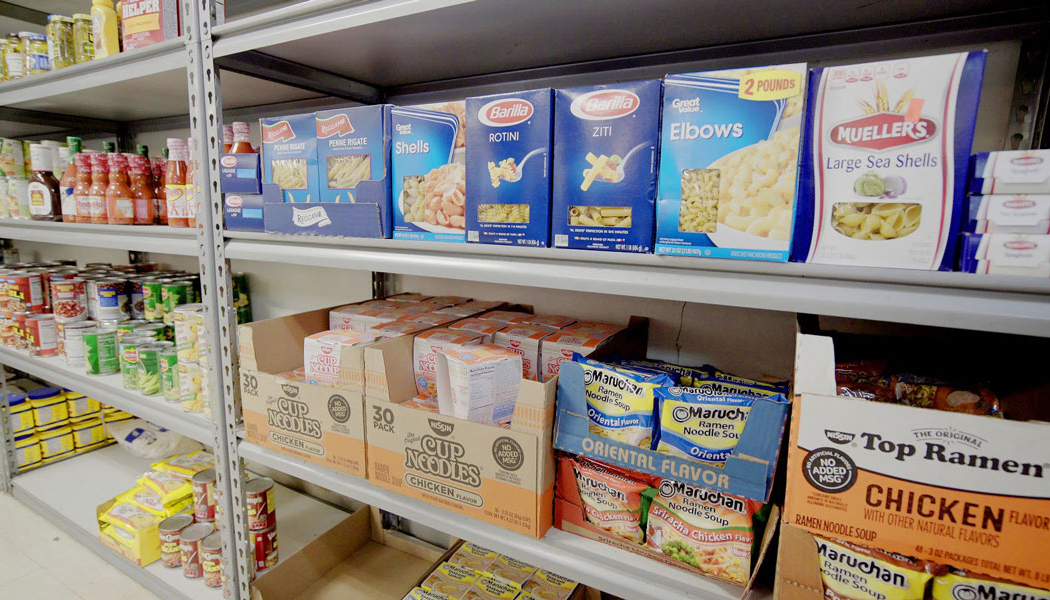 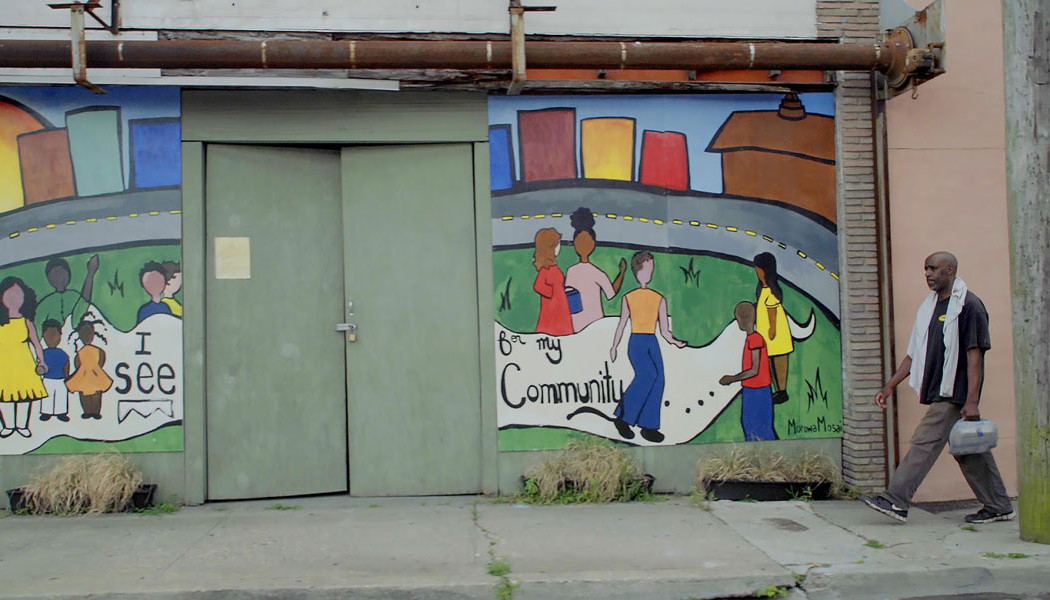 A STORY OF STRUGGLES AND SOLUTIONS ACROSS THE US 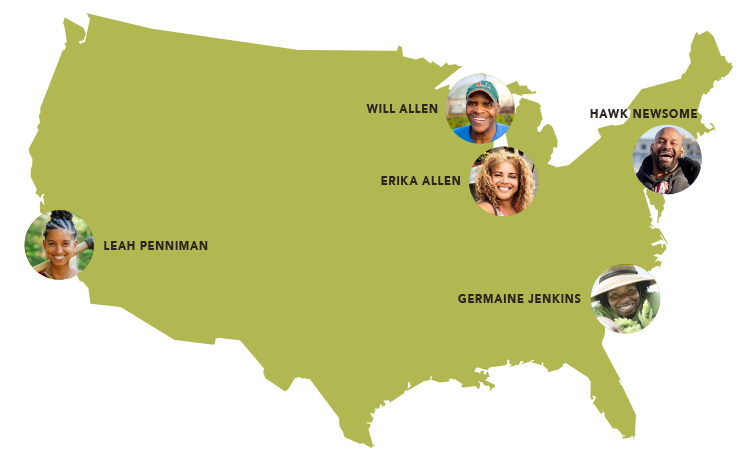 ROOTED is on the ground in Charleston, Chicago, Milwaukee, Brooklyn, and Oakland to document the national surge in food justice activism and urban farming.

On her journey, Germaine strikes up fast friendships with activist LEAH PENNIMAN, author of “Farming while Black,” who educates Germaine – and our audience – on the history of dispossession and discrimination that Black farmers have historically faced.  Germaine mentors HAWK NEWSOME, co-founder and chairman of Black Lives Matter Greater New York, as he cultivates his new Rejuvenate a Nation Project:a national movement to bring fresh food and wellness to underserved Black communities in the Bronx and beyond. Both friendships add the insight and ballast needed during the final stretch of Germaine’s journey to acquire her own land, dignity, and liberation. 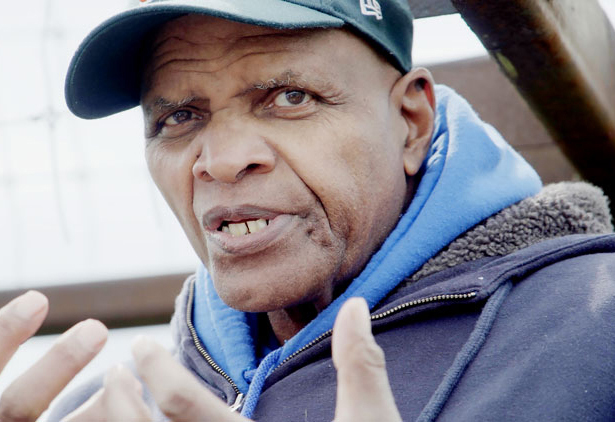 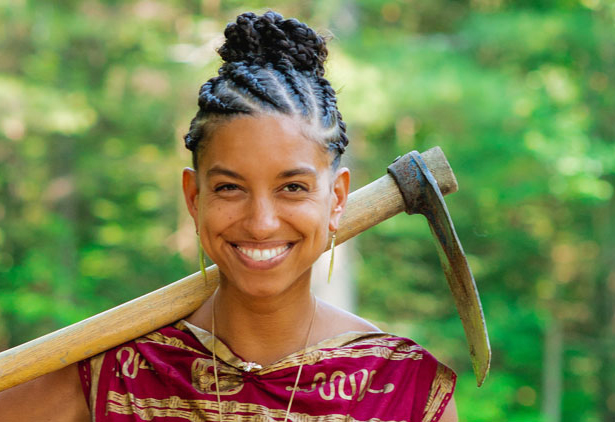 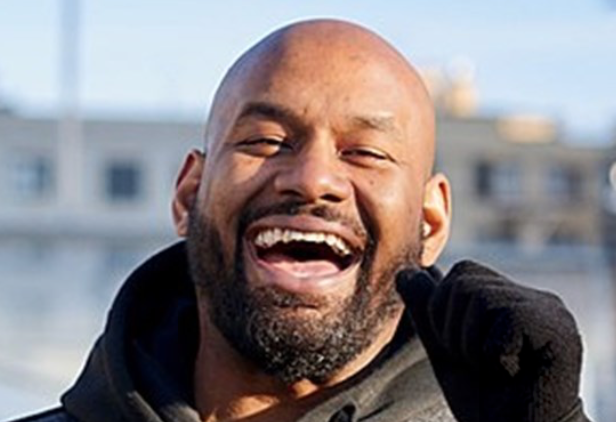 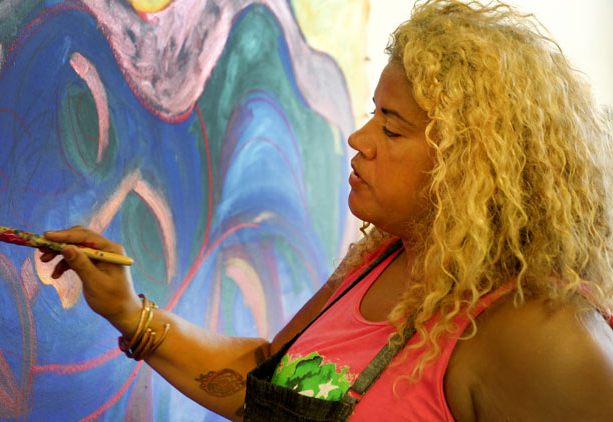 ROOTED also ventures north to Detroit to profile WILL ALLEN, the founder of Growing Power and Germaine’s personal hero. He is the son of South Carolina sharecroppers, a former professional basketball player, and a MacArthur “Genius Grant” recipient. Founded in 1995, Growing Power was the first-ever large scale urban farming non-profit to achieve major success. By 2009, it had a customer base  10,000 people strong.

In Chicago we will meet  Will’s daughter, ERIKA ALLEN, who sees food security and community development as the surest path to the eradication of racism and oppression. In 2017, she successfully rebranded the Chicago chapter of Growing Power as the “Urban Growers Collective” and refocused its mission  on education and job training initiatives for teens and incarcerated adults.

“We’re the rich soil. We are building the roots where people can come to be restored so they can take care of themselves and their families.”

Germaine’s struggle to own her land and help the people of her community occurs within  a longer history of focused attempts at food justice that this film will use to contextualize and emphasize the stakes of her mission.

ROOTED will dig into the history of the America’s systemic food injustice: , beginning with  the slave trade and discriminatory land policies, and continuing through Fannie Lou Hamer’s Freedom Farm Cooperative and the Black Panthers’ free breakfast programs, which inspired the current food justice movement. 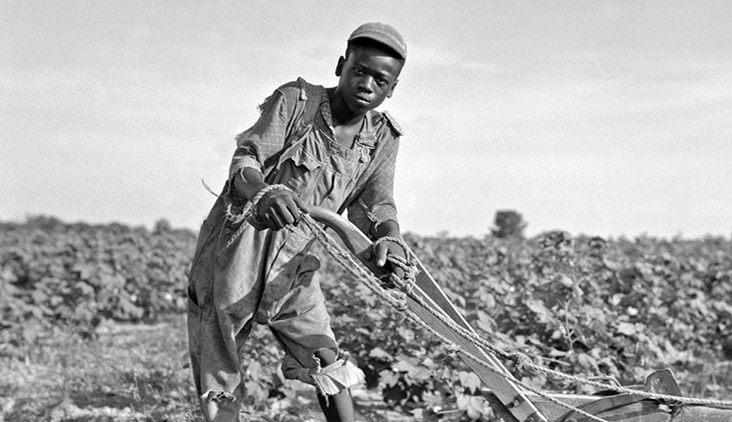 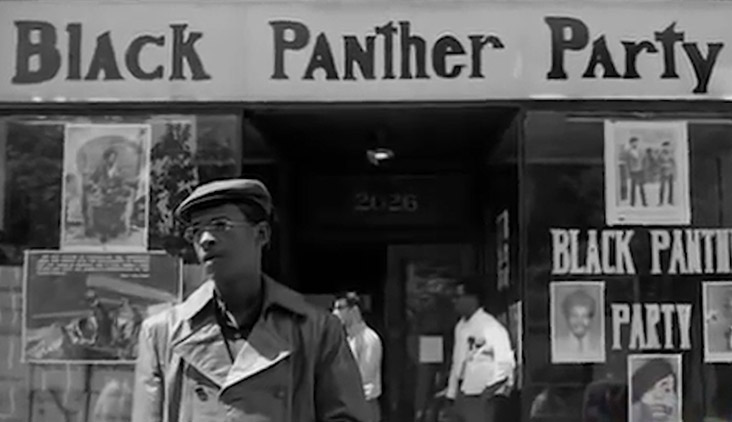 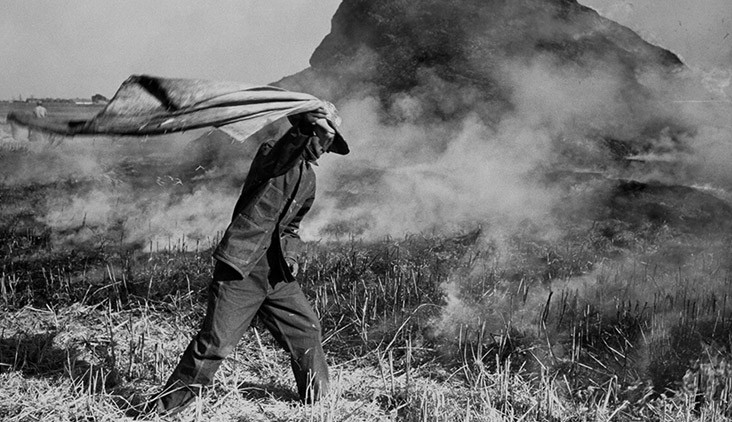 Germaine Jenkins is planting the seeds of food justice.
Are you ready to join the revolution?

Rooted is a fiscally sponsored project of independent feature project 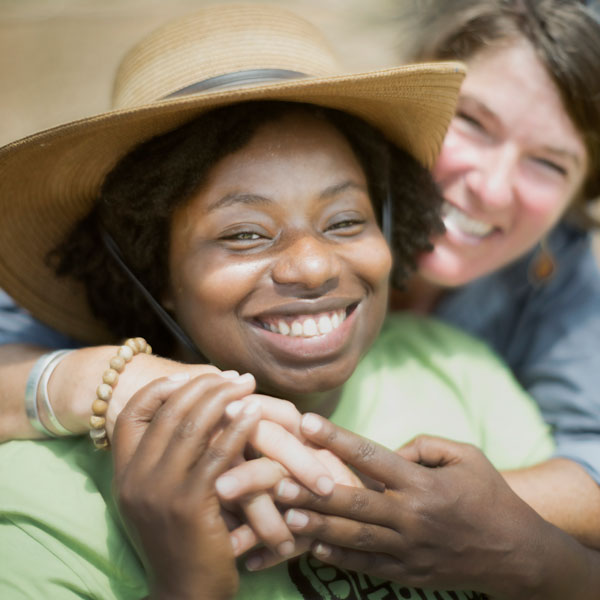 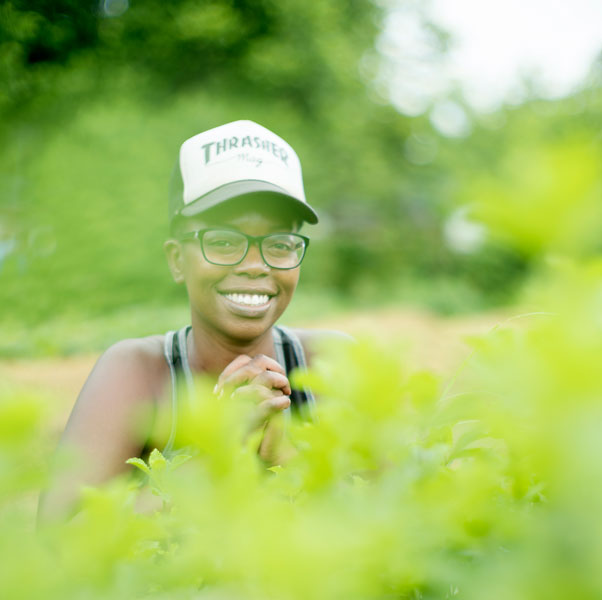 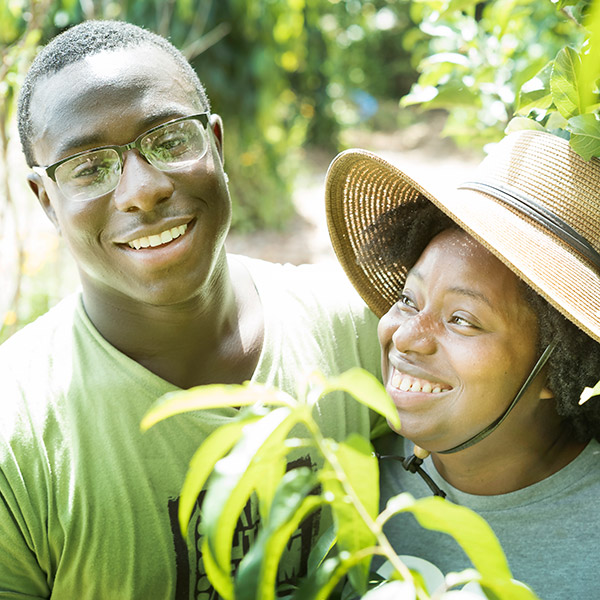 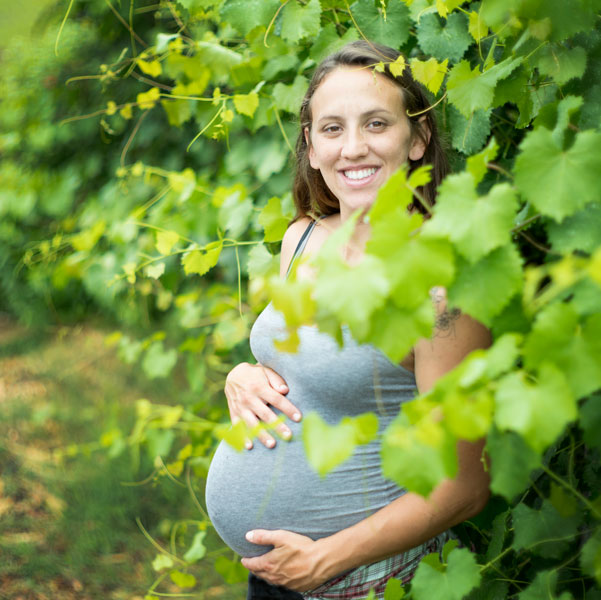 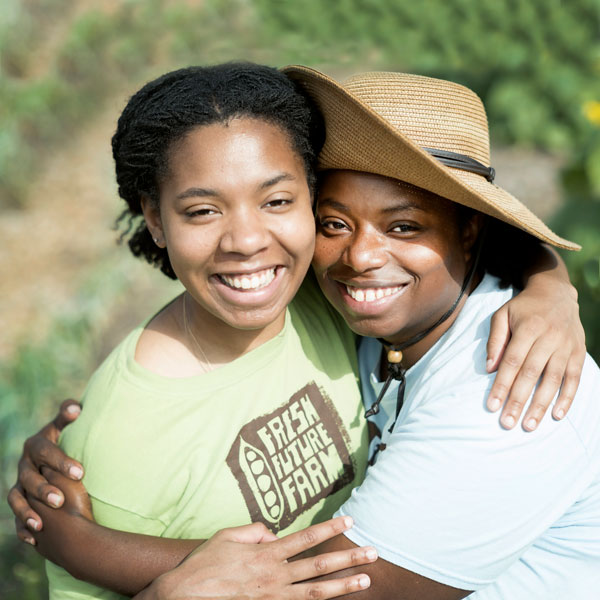 Seedlight Pictures is dedicated to rooting people to the planet—one picture at a time. Seedlight specializes in films that challenge conventional food systems and reconnect us to health and wellness through a better relationship to the food we eat and the planet that sustains us all.

“Maybe you are searching among the branches for what only appears in the roots.”
–  Rumi